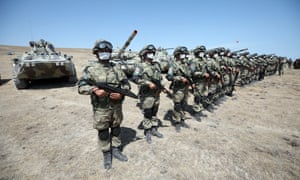 Syrian rebel fighters have signed up to work for a private Turkish security company as border guards in Azerbaijan, several volunteers in Syria’s last rebel stronghold have said, at a time when the long-running conflict between Baku and neighbouring Armenia is showing dangerous signs of escalation.

The potential deployment is a sign of Turkey’s growing appetite for projecting power abroad, and opens a third theatre in its regional rivalry with Moscow. Ankara is already engaged in a volatile power struggle with Russia in the conflicts in Syria and Libya, and tensions could now spill over into Nagorno-Karabakh.